As with many things in life, events are not siloed. When any type of event or action occurs, planned or unplanned, it causes changes and reactions to surrounding components. Think of a stone thrown into a pond creating ripples in the water while also altering the aquatic environment below the surface. This school of thought can also be applied to the Ethereum Merge.

The Ethereum blockchain, with its native coin Ether (ETH), is a pillar of the crypto asset industry — an industry that has become increasingly mainstream with each passing year. Ether is the second most popular altcoin, with people searching Google for “Ethereum” an average of 2.1 million times a month. ETH has risen to a value of more than $100 billion in terms of market capitalization, with the Ethereum blockchain serving as a common choice for developers building decentralized applications (DApps). In a survey conducted by the Bybit crypto exchange, Ether is the second most heard-of alternative to Bitcoin (BTC), with one in six United States adults saying that they’re familiar with it (15.4%). 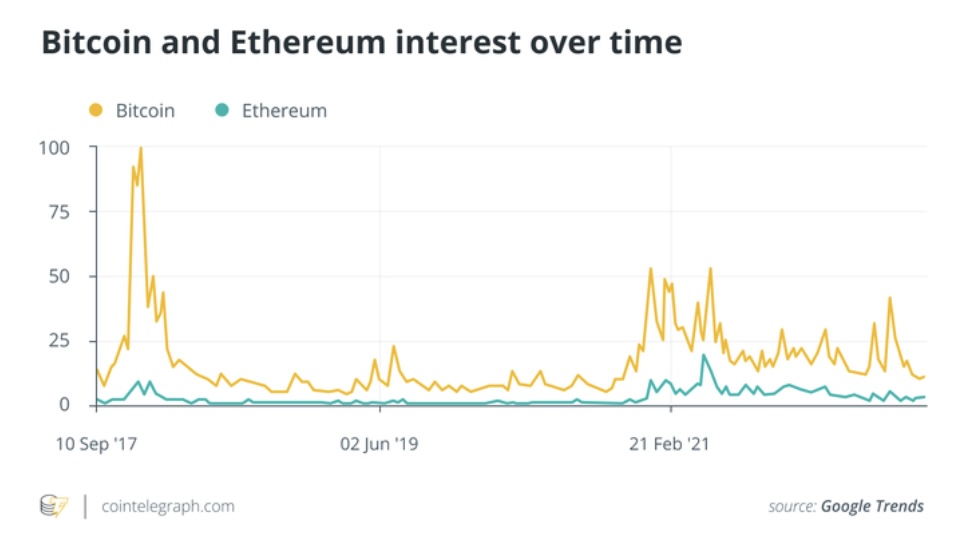 The Ethereum Merge, or simply the Merge, fundamentally changes the Ethereum blockchain in pursuit of greater scalability and security while requiring less energy usage. This move may cause ripple effects for the broader crypto industry.

What is the Merge?

Expected to occur on Sept. 15, the Merge represents an end for the PoW chain, with all future efforts and attention focused on the PoS chain. PoW vs. PoS has been a long-standing debate in the crypto and blockchain sectors. Among the mix of arguments includes PoS blockchains requiring less energy than PoW networks.

What does Ethereum (and crypto more broadly) look like post-Merge?

After the Merge, Ethereum will be a PoS blockchain, with the PoW chain becoming a thing of the past. A difficulty bomb will reduce mining rewards, making mining on the chain unattractive. The discussion has arisen regarding miners resisting the change and continuing with a forked PoW version (or versions) of Ethereum, but the main Ethereum blockchain will be the PoS one without miners. 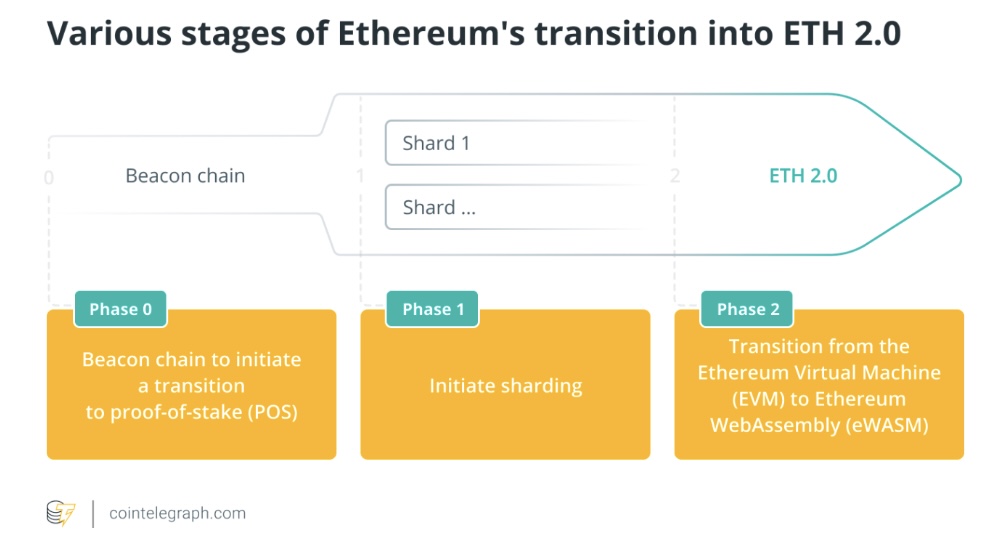 Post-Merge, Ethereum will call on validators instead of miners to run the blockchain. Validators must lock up 32 ETH to support the blockchain’s function while earning rewards for doing so. Other methods also exist for contributing to the network via staking, such as services offered by crypto exchanges.

The Merge is not the end of Ethereum’s broader transitional journey. The event marks just over the halfway point in Ethereum’s transition — 55% of the way to completion to be precise, according to Ethereum co-founder Vitalik Buterin. Sharding is the next major goal for Ethereum, which aims to improve scalability via segmenting the blockchain into parallel portions.

There are some misconceptions about the Merge

Some common misconceptions have circled the Merge. For one, some people believed Ethereum would magically become faster and have significantly lower transaction fees. But this is not expected to occur right away.

Likewise, some have wondered whether the Merge would result in a flood of unstaked ETH hitting the market. That isn’t the case, either. In reality, staked ETH is going to remain locked until the Shanghai upgrade, which is scheduled for 2023.

Thirdly, some observers have suggested that price action will be easier to predict, advising the value of ETH will surge because of the upgrade or arguing it will become a “sell the news” event that results in the price dropping. This tactic plays on market psychology. If everyone is excited about an upcoming event, the related asset could climb in price until the event. Then, when the event occurs, prices may drop due to the event being anti-climactic and unable to live up to the hype and expectations.

As with many events in crypto, traders are looking to capitalize on competing predictions. One wild card, however, is the downward price action the crypto market has already suffered, which makes it more difficult to make any prediction with certainty.

Possible trading strategies for the Merge

If you’re looking to capitalize on bullish investor sentiment ahead of the Merge, there is a case to be made for holding regular ETH, which is also known as holding “spot.” If your investment funds are sizable enough, you might even consider holding the 32 ETH required to become a validator for the network, earning around 4% interest annually. That number is expected to rise to roughly 7% post-Merge.

If the price doesn’t surge quickly enough for you to win a 1,000% return this year, your assets will at least continue working for you during the market doldrums. (Just keep in mind that your 32 ETH will remain locked until the Shanghai upgrade sometime in 2023.)

As a second strategy — if you’re looking to hedge your bag of spot ETH — you might want to consider devoting a smaller portion of your portfolio to a short position using futures contracts. Depending on how well you “time the market,” that small percentage of your portfolio could be enough to compensate for any short-term losses you experience on your spot holdings. If the market goes up, conversely, you may lose the sum you bet on futures contracts. But your spot portfolio may be adequate to cover those losses — should you choose to sell. 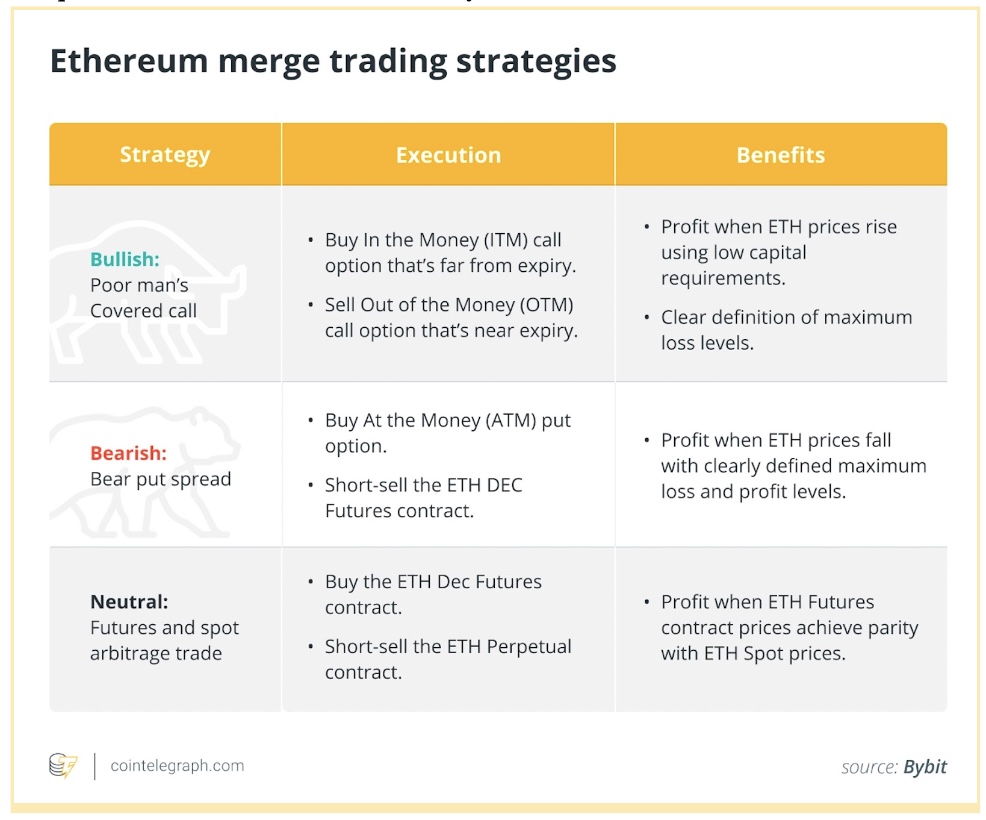 A third alternative, considering the market’s volatility, is to “sit” in stablecoins. This is a reasonable approach if you don’t feel a great amount of confidence in the direction the market may take next. When it finally breaks out — which it will — you can attempt to capitalize on the extreme movement. If the price of ETH drops back to $880 — which it reached in June — you may want to go long. Or if it explodes to obscene heights, you may opt to go short.

Whatever you choose, keep in mind that the majority of active traders lose most of their money. Your most likely chance to succeed is to pick a price point, make your purchase, and forget about it until favorable market conditions return.

Check if your centralized exchange will make airdropped ETH accessible

Centralized exchanges differ in how they will handle the Merge. The decision that most users will probably want to keep an eye on is whether their chosen exchanges opt to give them their “airdropped” Ethereum.

Specifically, if some blockchain participants keep operating the proof-of-work chain, Ethereum holders will suddenly have two versions of their ETH tokens — one set on the proof-of-stake chain and one set on the proof-of-work. Some exchanges, such as Bybit, have said they will offer support for both chains, allowing users to sell or withdraw their tokens. Others — including Coinbase and Binance — have declined to make the same commitment. (And of course, users can also ensure they’ll be able to access their ETH by keeping it in their self-custodial wallets.)

Keeping tokens in complicated financial protocols could also prevent the blockchain from recognizing ETH holdings. That includes lending protocols and liquidity pools. Users may want to withdraw their ETH from such protocols a couple of days before the Merge if they want to ensure their holdings are recognized.

Another issue to be cognizant of is downtime during the Merge. Exchanges are mostly planning to disable deposits and withdrawals of ETH and tokens on its blockchain — known as ERC-20 tokens — beginning on Sept. 14. Most plan to reenable those activities by Sept. 16, though the date could change in the event of unforeseen technical problems.

DApp users will benefit, too

The crypto and blockchain industry is a vastly interconnected space. Ethereum itself hosts almost 3,000 DApps on its blockchain as of the time of publication, according to State of the DApps. One example of Ethereum’s significant impact on the overarching crypto sector can be seen when looking back at the high Ethereum fees present in 2021, which may have deterred some DApp users.

DApp users, ETH transactors, and more could be affected by the Merge, but more so as part of the grander scheme of the Ethereum 2.0 movement. The Merge in and of itself is part of the broader Ethereum transition, which ultimately looks to increase security and scalability with lessened energy usage. The Merge should have a significant impact on the energy required to run the Ethereum blockchain while operating slightly quicker, but other benefits may take more time as part of the broader transition it seems.

ETH does not have a maximum coin supply, although it has a cap on new ETH created per year. Ethereum Improvement Proposal 1559 put in place an ETH burning mechanism based on transactions, although the Ethereum blockchain also produces new ETH. The Merge will decrease the amount of new ETH created annually, potentially affecting the asset’s price activity in the market.

What’s Next for Bitcoin and the Crypto Market After the Ethereum Merge is Over?

What’s Next for Bitcoin and the Crypto Market After the Ethereum Merge is Over?
Ethereum