How to build your first blockchain on Substrate?

Setting up your development environment is the first step in starting with Substrate. After this, developers can create a small network of validators by updating the runtime code for a node and then gradually scale it up.

When Ethereum was launched in July 2015, the world was introduced to the concept of smart contracts that hoped to revolutionize the blockchain space and allowed anyone from developers to enthusiasts to deploy decentralized applications (DApps) on the Ethereum mainnet.

With various DApps currently in use across different blockchains like Ethereum, they offer many use cases including banking, gaming, finance, online shopping and social media, with an ever-expanding user base across the globe.

Having provided the infrastructure needed for developers to create innovative digital applications, Ethereum, however, has limitations such as limited scalability and high gas fees, factors that are now inhibiting developers from building specialized solutions that can rival popular centralized platforms like Twitter, Facebook and Netflix.

To overcome these challenges and explore the possibilities of blockchain technology, Ethereum co-founder and its first chief technology officer Gavin Wood left the Ethereum Foundation and founded Parity Technologies to build blockchain infrastructure that can help create the foundation of a decentralized web, or Web3 as it is known.

Armed with a vast industry experience and deep understanding of creating blockchains, he went ahead to build Substrate as an open-source and future-proof blockchain framework for developers to build on, enabling them to tweak their blockchain’s architecture in line with changing customer preferences.

Substrate-based blockchains can be integrated as parachains on networks such as Polkadot or Kusama and provide a high level of interoperability, helping to bring to market truly decentralized real-world solutions that are faster, cheaper and safer than ever before.

What is substrate blockchain and how does it work?

The vision of Web3 being a decentralized blockchain-based version of the internet depends on developers being able to create different blockchain applications that can interact with each other and with networks such as Ethereum and Bitcoin.

Typically, a blockchain framework is used by blockchain developers to create such applications and by using in-built templates, they can save a lot of development time at the expense of limited customization ability.

This is where Substrate, an open source blockchain framework for building customized blockchains, is enabling developers to quickly build blockchains based on field-tested code that is powering a large ecosystem of blockchain projects across the world.

Comprising a voluminous collection of tools and libraries, Substrate is the primary blockchain software development kit (SDK) that was used to build the Polkadot layer-0 protocol and can be used by developers to create any type of blockchain.

The primary block of any blockchain is the node and relies on a decentralized network of these nodes or computers that communicate with each other to maintain the current ledger with the latest transactions. Each node in a blockchain network serves as both the client and the server, requesting and responding to requests for data as per requirements.

What makes a Substrate node unique is the way in which these operational responsibilities are divided horizontally to provide a modular framework for building blockchains. Each Substrate node makes use of two main elements: an outer node that handles network activity and a runtime that determines transaction validity and is responsible for handling changes to the blockchain’s state transition function.

The outer node is responsible for communicating with other nodes, managing the transaction pool, peer discovery and responding to remote procedure calls (RPC) or browser requests using Substrate’s RPC Application programming interface (API). By querying the Substrate runtime or by providing it with information, the outer node uses specialized runtime APIs to handle this communication.

With the Substrate runtime handling everything that happens on-chain, it is the core component of the node for building blockchains and controls how transactions are included in blocks, how blocks are returned to the outer node or how the chain state is changed in response to transactions.

How does Substrate enable you to create a custom blockchain?

Substrate offers greater freedom, flexibility and more optimization abilities than building on top of a general-purpose smart-contract blockchain like Ethereum. Moreover, Substrate-based blockchains can exist as “solo chains” or integrate into Polkadot or Kusama to become parachains.

Developers may choose to first start with a Substrate node template, which is the basic unit in building a blockchain using Substrate and provides a lot of pre-built functionality with default implementations for aspects such as account management, consensus, privileged access and peer-to-peer (P2P) networking.

These Substrate node templates are maintained in the Substrate Developer Hub and developers can also access Substrate’s large, active and helpful builder community that is continuously contributing to the ecosystem.

For more complex projects, though, developers would want a higher degree of freedom to determine their blockchain’s logic and this is where Substrate’s framework for Runtime Aggregation of Modularized Entities (frame) comes into play.

frame is one of the most powerful tools provided by Substrate and comprises a number of modules and support libraries to simplify runtime development. These modules are also known as Substrate pallets and represent customizable business logic for use cases such as staking, governance, consensus and other important activities that developers may want to include in the runtime.

Additionally, developers can use its system, support, and executive pallets to provide a vast range of services for the runtime environment. While one can build a Substrate-based blockchain without using frame, the different pallets and libraries enable developers to compose a custom runtime logic by using its predefined components as a starting point.

By combining pre-built and custom pallets to infinitely control the features and functionality provided by the Substrate blockchain, developers can achieve specific results with a high degree of flexibility and convenience.

How to create your first blockchain on substrate?

Whether you are a newbie developer or someone with prior experience in using a blockchain framework, Substrate offers tutorials that focus on providing hands-on experience and the Substrate Playground for those who would like to experiment without much guidance.

Substrate tutorials are suitable even for absolute beginners, covering all steps without going much into the coding details. Apart from these tutorials, Substrate provides a number of how-to guides on specific topics and additionally grants access to many open source projects that have been built using Substrate. 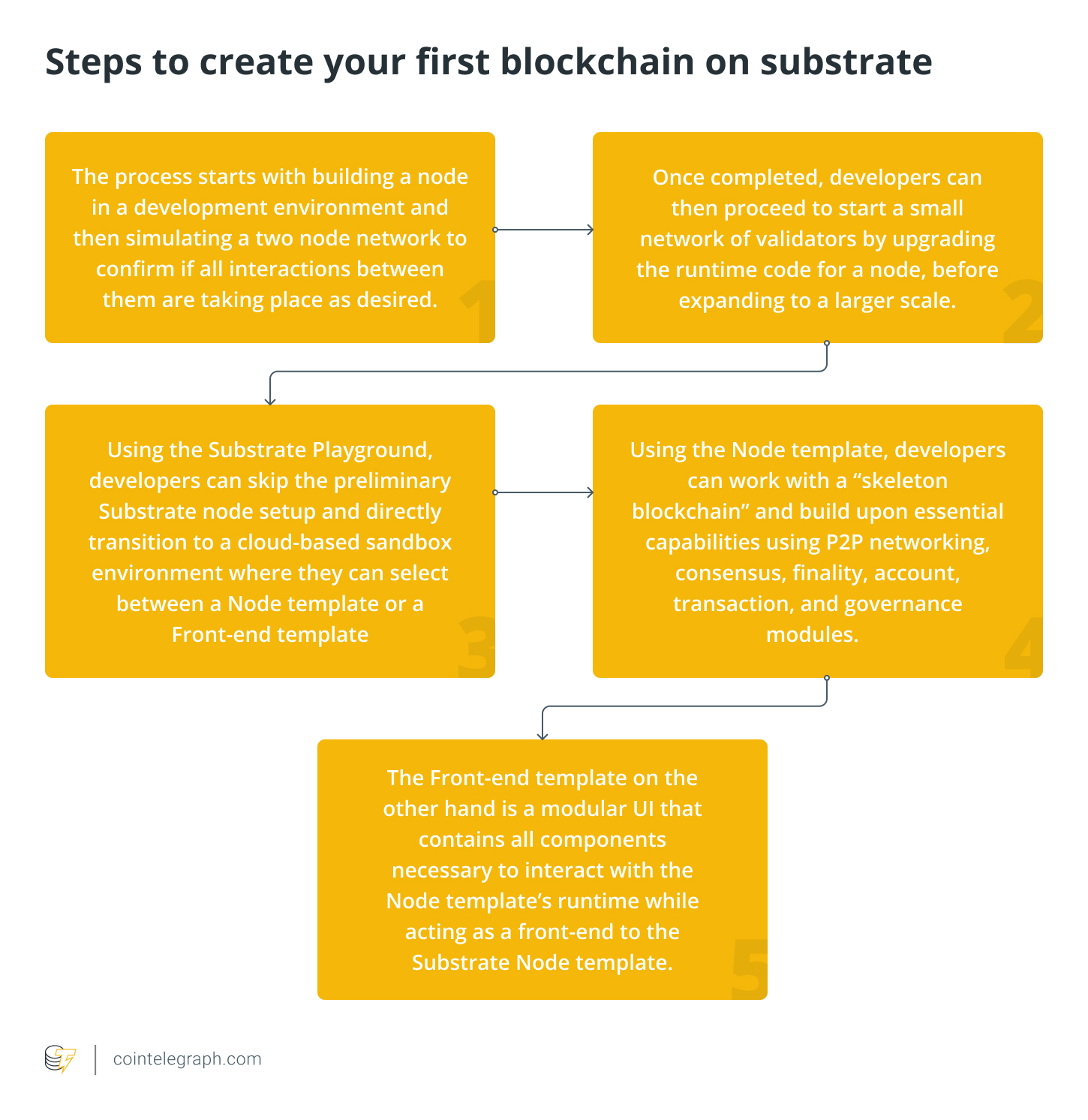 However, it is important to understand how to work with pallets on Substrate in order to customize each node’s logic so that it can be used in conjunction with smart contracts to incorporate even more functionality in the resultant blockchain.

Thus, Substrate offers all necessary support right from installation to successfully running your own custom blockchain. While it doesn’t have a native crypto-token, the Polkadot (DOT) token is most used considering the fact that it is compatible with other parachains in the Substrate and Polkadot ecosystem, reflecting its focus on interoperability and scalability.

Can There Be A metaverse Without Blockchain?
Blockchain Technology

The worst places to keep your crypto wallet seed phrase