The Fed prepares an inflation move that could act as a "sledgehammer" for crypto and risk assets.

Bitcoin (BTC) faces another week of “huge” macro announcements after the lowest weekly close since July.

After days of losses following the latest inflation data from the United States, BTC/USD, like altcoins and risk assets more broadly, has failed to recover.

The largest cryptocurrency has yet to flip $20,000 to convincing support, and as the third full week of September begins, the danger is once again that that level could function as resistance.

Bulls have plenty to worry about — the coming days will see the Federal Reserve decide on the next key rate hike, something that will affect the market far beyond mere sentiment.

In addition, the aftermath of the Ethereum (ETH) Merge continues to play out, while at defunct exchange Mt. Gox, reimbursements to creditors add another potential cloud to the Bitcoin price landscape.

We take a look at five potential market-moving factors to keep an eye on in Bitcoin over the coming week.

The main event for the week comes in the form of the Federal Reserve’s decision on key interest rates.

After the Consumer Price Index (CPI) print for August came in “hotter” than expected, the Fed will be under pressure to respond.

As such, the market has now fully priced in a minimum 75-basis-point hike for the Fed funds rate and is not discounting the chances of 100 basis points, according to the CME FedWatch Tool as of Sep. 19.

A 100-point increase would be the Fed’s first such action since the early 1980s. 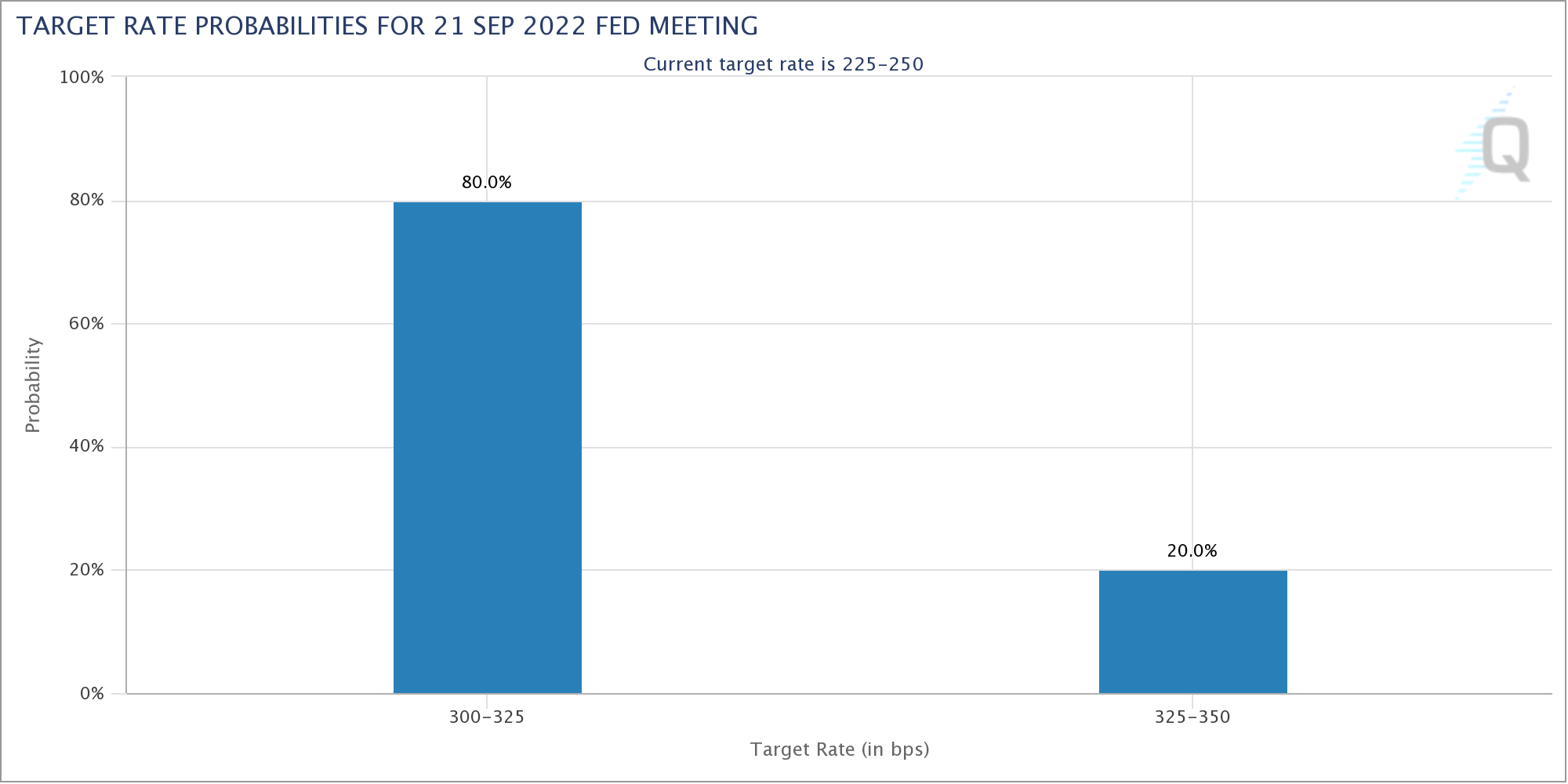 The Federal Open Market Committee (FOMC) is due to meet on Sep. 20-21 and will publish a statement confirming the hike and Fed support for the figure involved.

“The Fed will not be easing any time soon, and it’s classic human nature because now we have the benefit of knowing how far in the mistakes they made by easing too much,” Mike McGlone, senior commodity strategist at Bloomberg Intelligence, said in an interview with Kitco over the weekend.

Risk asset growth since the March 2020 crash had “swung way too far to one side,” he said, and it is now “very clear” that a reversal will take hold.

Crypto will figure in the overall market reset, and Bitcoin will ultimately come out ahead, McGlone continued, reiterating a long-held theory about the cryptocurrency’s future. Gold will also outperform, but for both, pain is to come first.

“Unfortunately, for the Fed to stop this sledgehammer, risk assets have to make them stop by tightening for them,” he summarized.

A 100-basis-point move this week would hasten that process, which is now seeing catalysts from central banks beyond the U.S. after these were initially slow to begin raising rates to combat inflation.

Popular Twitter analytics account Games of Trades meanwhile said that it was crunch time for the S&P 500 ahead of the start of Wall Street trading.

“In times like this, with major uncertainty across the board, the Crypto market is not gonna do much without permission from equities,” analyst and commentator Kevin Svenson added.

The past week has seen tailwinds stack up for Bitcoin, leading to BTC price action falling in kind.

BTC/USD lost over $2,000 in a single weekly candle, closing below $20,000 in what is the lowest such close since July, data from Cointelegraph Markets Pro and TradingView shows. 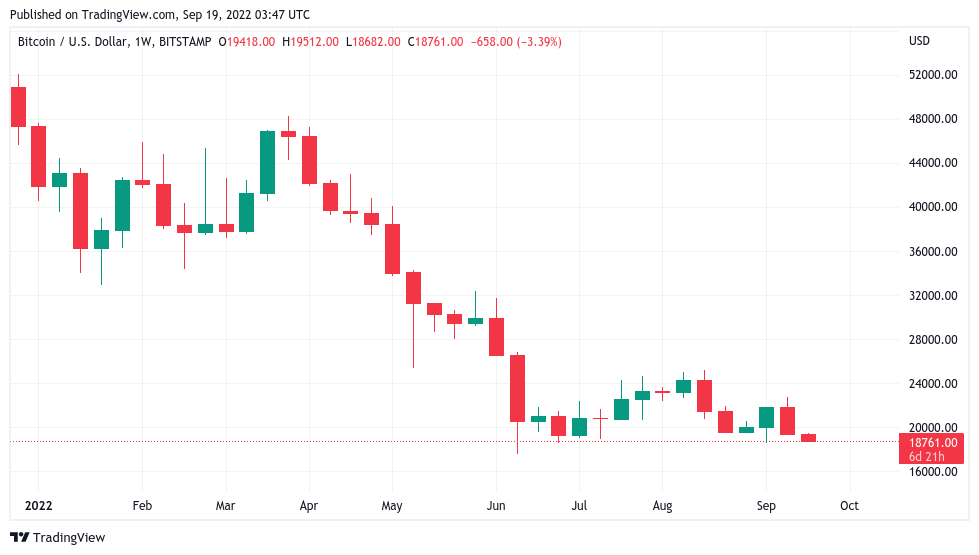 The close was followed by a sharp downturn in which the pair fell under $19,000. 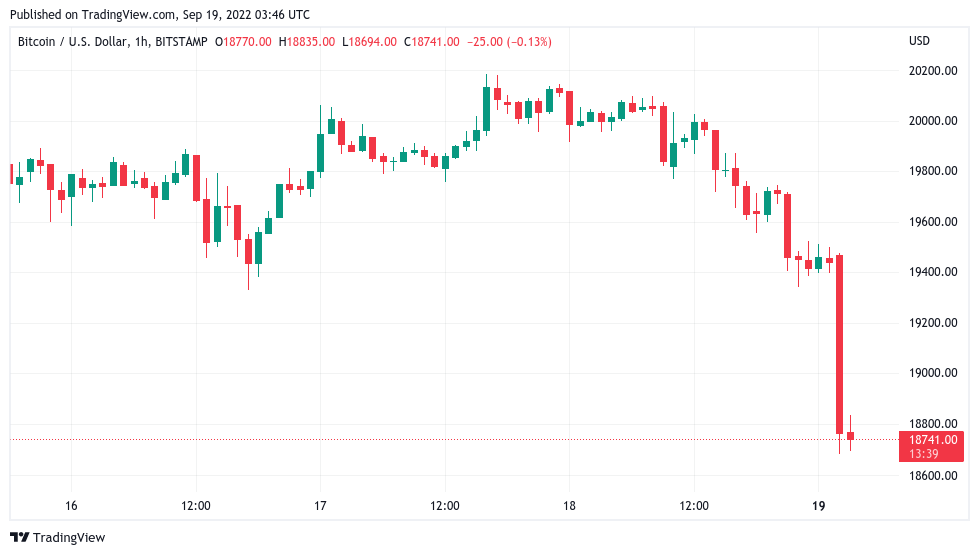 The bearish mood is perhaps understandable — the Ethereum Merge became a “sell the news” event, and along with macro triggers contributed to a fresh risk asset flight.

Now, analysts are considering the chances of the downtrend staying in place at least until the Fed rate announcement passes.

“BTC has chopped through the weekend, but there's always the potential for some volatility before the close,” on-chain analytics resource Material Indicators told Twitter followers in a part of a post on Sep. 18.

An accompanying chart showed the state of play on the Binance order book, with support at around $19,800 since failing to sustain price action.

The day prior, Material Indicators had reasoned that there was likewise little point in imagining that a deeper drop would be avoided. Judging from the order book, bidding action was still not strong enough to support current levels.

Considering when a macro bottom could occur, meanwhile, popular trader Cheds bet on Q4 this year, describing Bitcoin as “right on track” to do so.

“$BTC weekly starting to press range lows,” he added in a further tweet into the weekly close.

Shorts were stacking up at the time of writing on both Binance and FTX, suggesting a concerted effort to drive the market lower by derivatives traders. This, fellow popular account Ninja argued, would not ultimately be successful beyond the Wall Street open.

Keenly eyeing a potential macro high, meanwhile, is the U.S. dollar, which has rebounded from losses seen post-CPI print.

A classic headwind for crypto, the U.S. dollar index (DXY) currently sits at just under 110, having consolidated for several days.

The Index hit 110.78, its highest since 2002, earlier this month while avoiding enduring significant retracements.

Analyzing the immediate future last week, Hyland warned that a “new blow off top” for DXY would accompany a “capitulation event” in risk assets.

A look at the inverse correlation between DXY and BTC/USD meanwhile confirms the impact of sharp upwards moves of the former on the latter. 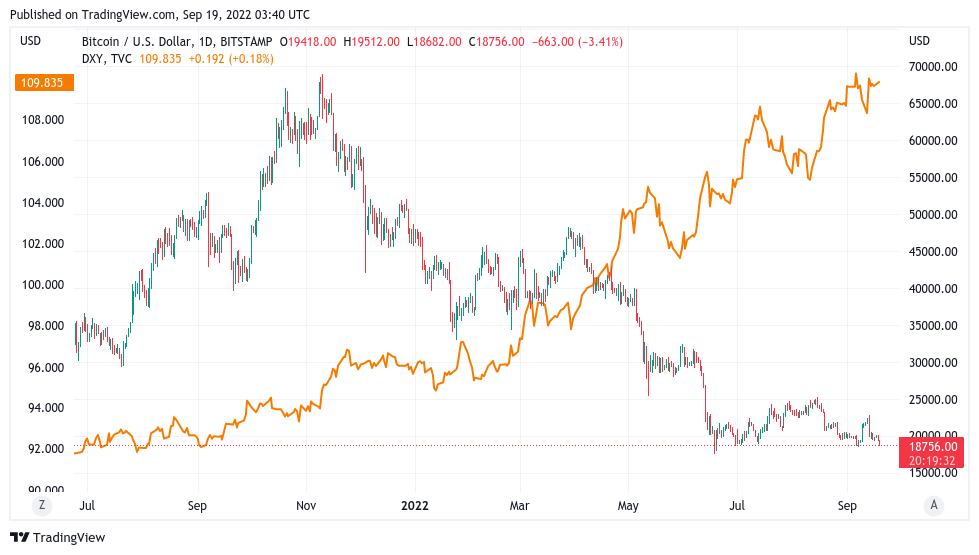 Ethereum gets the post-Merge blues

In the week after the much-vaunted Merge, Ethereum is experiencing a major comedown from the hype.

In a move that may skew market cap share back in Bitcoin’s favor, ETH/USD declined 25% last week.

Currently trading under $1,300, its lowest since July 16, the pair is seeing bearish prognoses from analysts and traders across the board. 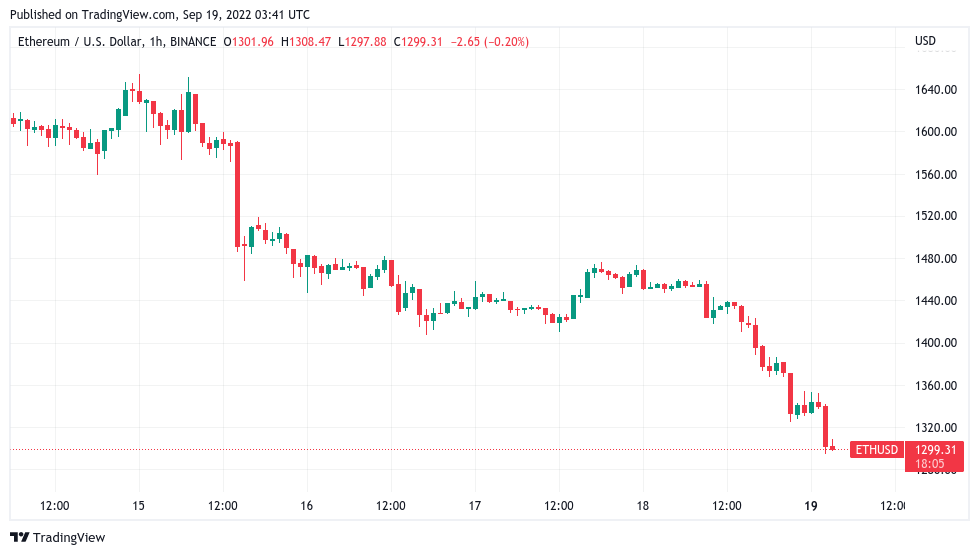 “Ethereum failing to hold critical support,” Svenson warned as the weekly close failed to draw a line under the losses.

Analyst Matthew Hyland meanwhile gave a target of $1,000 for ETH/USD, adding that $1,250 “should hold as some support.”

Against BTC, Ethereum was down up to 19% over the week, with Bitcoin’s share of the overall crypto market cap increasing 1.2% since Sep. 14.

For well-known trader CryptoGodJohn, everything was nonetheless playing out for a “generational entry” opportunity on the pair.

Less enthusiastic was Samson Mow, CEO of Bitcoin adoption startup JAN3, who noted that while ETH/USD was still above its 200-week moving average (WMA) at current levels, Bitcoin was below its equivalent.

The 200 WMA functions as an important trendline during crypto bear markets and reclaims it after its loss as support has historically signified a return to strength.

Even as recent price volatility sees an uptick in on-chain activity, hodlers are keeping their resolve, on-chain data confirms.

According to analytics firm Glassnode, coins held for at least five years are showing just one trend — up.

In fresh data on the day, Glassnode confirmed that the percentage of the BTC supply last active in September 2017 or earlier reached a new all-time high of 24.8%.

The amount of the supply last active between five and seven years ago, meanwhile, hit its highest in almost two years — 1.01 million BTC.

At the same time, “younger” coins are also on the move, with the 6-12 month bracket seeing five-month highs of its own.

Nonetheless, the long-term trend among seasoned investors is clear when it comes to Bitcoin, as evidenced by the supply portion held by long-term holders (LTHs).

“LTH Supply is the volume of Bitcoin which has been dormant for 155-days and is statistically the least likely to be spent during market volatility,” Glassnode explained last week as the metric hit all-time highs of 13.62 million BTC.

After the CPI event, as reported, Bitcoin flows to exchanges saw their largest single-day tally in several months.