The Coronavirus Could See Bitcoin ‘Explode In Value’

Investors are fearful the spreading coronavirus will weigh on China's output in the coming months with manufacturing, materials, and consumer goods companies among the hardest hit stocks.

Bitcoin, meanwhile, climbed to 2020 highs of $9,620—somewhat advancing its reputation as a so-called safe-haven asset and flying in the face of warnings the price could be about to slump.

The coronavirus has now killed 361 people in China and one in the Philippines, with confirmed infections in China topping 17,000.

The Shanghai Composite index fell nearly 9% at its open before recovering slightly, despite China's central bank announcing new measures to ease the impact of the outbreak.

Bitcoin has climbed through the first few weeks of 2020 adding around 30% since the beginning of the year, first appearing to be boosted by geopolitical fears surrounding the escalating tensions between the U.S. and Iran and then gaining on fears the coronavirus could knock global trade.

Bitcoin and cryptocurrency analysts see the $10,000 mark as the next "barrier," with Adam Vettese, analyst at brokerage eToro, predicting the target might be in reach now the $9,600 "hurdle" has been cleared.

"With speculation that bitcoin is on track to break the $10,000 barrier following a sustained rally ... [bitcoin] still sits around a healthy $9,300," Vettese wrote in a note.

“The ongoing upward trajectory of the price of bitcoin correlates to the spread of the coronavirus," said Nigel Green, chief executive of the financial advisory deVere Group, adding traders should expect bitcoin’s price to continue to rise until the coronavirus peaks.

"The more individual cases that are identified, the more countries around the world that are affected, and the greater the impact on traditional financial markets, the higher the price of bitcoin has jumped," Green said.

Others have suggested bitcoin has a lot to gain as market confidence falls.

Not everyone is confident bitcoin's recent gains can be attributed to fears around the spreading coronavirus, though.

"Whatever's happening in the stocks doesn't seem to be having any affect on the cryptomarket whatsoever," Mati Greenspan, the founder of research group Quantum Economics wrote in a note. "Crypto is neither acting like a safe haven in the face of the virus, nor is it selling off with the other risk assets. Rather, it remains completely uncorrelated."

Just last week investors were warned the latest bitcoin rally might have come too fast and gone too far.

Analysis of bitcoin technical data revealed the bitcoin price was above the upper-band limit of the GTI Vera Band Indicator—something that has twice recently signaled an imminent correction.

Back in July, the GTI Vera Band Indicator flashed warning signs before bitcoin began its steady fall from almost $10,000 per bitcoin to lows of around $6,600 seen in December. 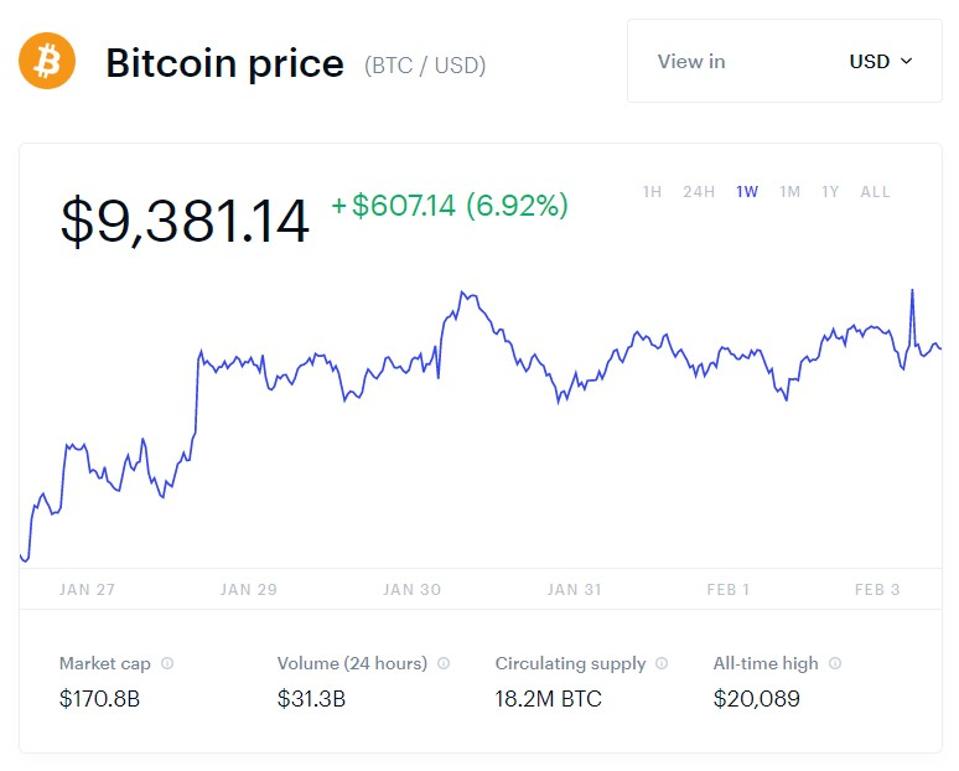 Meanwhile, the coronavirus has also caused problems for the bitcoin and cryptocurrency industry.

Two crypto mining hardware manufacturers last week notified customers their shipments would be delayed at least a week because of the coronavirus quarantine in China.

"Many firms have extended New year holidays, some as far as February 10th," Vettese added. "As well as affecting deliveries, these extensions will undoubtedly affect overall production numbers across industries when they are reported [this] month."