Bitcoin has been an excellent gauge of trouble in China since the trade war kicked off in 2019. China has capital controls and massive wealth, so that in times of stress huge volumes of money will seek havens, of which bitcoin is an asset with a tiny market cap when compared to the wall of money in the system.

If you put yourself in the position of a wealthy mainland Chinese person, what would you be thinking right now? It is scary enough for us in the West to see this outbreak when there are barely 600 infections, imagine when you are “kettled” in China with tens of thousands of infections and travel bans all around.

Would you not buy some bitcoin (BTC)? I believe that this reality has been feeding directly into bitcoin’s price. So when the infection numbers out of China were showing drops in the rate of growth, it was strange to see bitcoin staying at highs above $10,000. They fell back under $10,000, as you would expect if the BTC thesis and infection numbers were going the right way, but suddenly the price popped back up to $10,500. 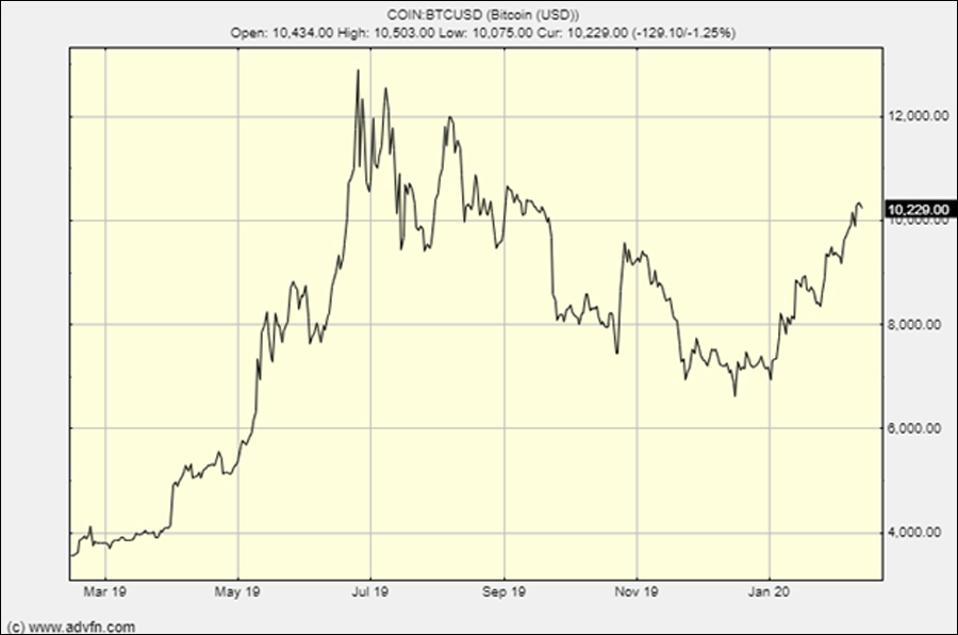 That meant either the thesis was mistaken, or the numbers were wrong.

Well, today the numbers have been revised up dramatically and heads have rolled in the Chinese government. Markets, which had rallied on the old numbers showing growing control of the outbreak, slumped.

The thesis that bitcoin is a gauge for the outbreak holds.

So what does bitcoin at $10,000 tell us if this theory is right? It suggests that the outbreak is just about under control but that the situation is fragile. The official numbers are now hard to project in China with the range of outcomes going from 100,000 to 500,000 total infections, with the skies the limit possibility if these new numbers are more disinformation.

For those outside China, the key is the growth rate of infection and the rate of control for the current tally of around 500-600. This number can be expected to rise to a peak of total infections in mid- to late-March with similar timing to peak numbers in China. This is the growth rate that we need to watch. If the growth rate continues to fall, we can breathe a sigh of relief.

If bitcoin takes another leg up and hits $14,000, it will be time to make some serious plans. I have a fairly decent amount of BTC and I can assure you I would like to see it back under $10,000, because if bitcoin starts to drift down the chances are the outbreak is under control.

While the BTC coronavirus remains good we can hope to see it soon flagging good news. We should know next week. Meanwhile, I’ll be watching bitcoin and the “‘rest of world” infection numbers to gauge what happens next.